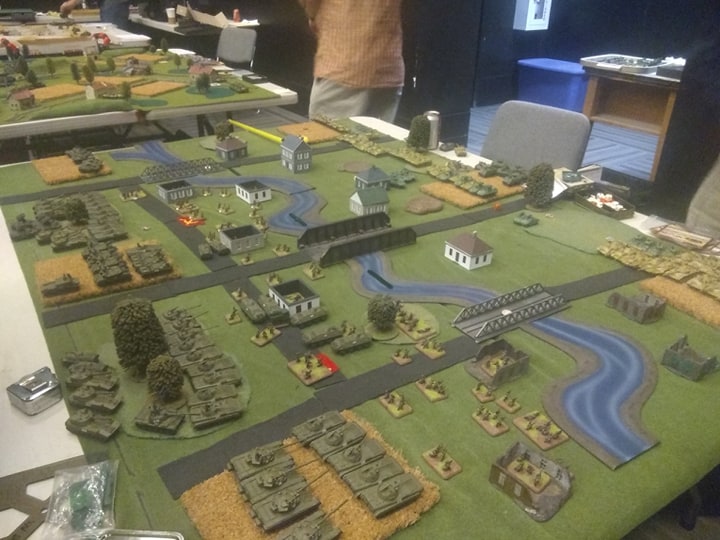 * Note that this tournament and convention will be monitoring health guidelines up to the date of this event. If there is a significant concern and/or outbreak with COVID-19 around or at the date of this event, leading to a risk to players health, the tournament will be cancelled. Players will be notified of it’s cancellation as soon as possible. This event will not be held if there is an occurrence of COVID-19 in the area. Players who are or feel ill around the time of this event are not recommended to attend.

Tournament details
Number of player openings: 16
The tournament is 3 rounds, 2.5 hours each, with 30 minutes for dinner after the second round. The tournament should end around 9:00pm.

Fee for the tournament is $20, this will go towards prize support and dinner. Money should be given to Anthony Burger directly.

Players should bring 3 identical physical copies of their list. Digital supplements/lists on tablets are welcome but physical lists are required. Lists must be legal according to battlefront miniatures. Players should print off their lists before arriving. Players will use the same list for the entire tournament. Players should email their list to Anthony Burger ([email protected]) by October 4th at 11:59pm to be reviewed for an extra sportsmanship point.

Players must also bring a copy of:
• The Team Yankee Rulebook V2 (mini or standard size)
• Forces book their list came from (multiple if using more than one nation)
• Any Errata related to the rules or their force(s)
Players should also bring dice, tokens, template, measuring tape, objectives, rule supplements or anything else they might need to play their army.
Armies don’t need to be fully painted or based but this will be part of the tournament’s scoring. WYSIWIG in terms of models is enforced. Players should inform their opponents of any specialized teams, or special rules before their games(s) starts.

Missions will be determined the Team Yankee more mission packet on Battlefront’s website. Packet will be provided. Players can select a single stance (Attack, Maneuver, Defend) twice per tournament. Players should use a dice to indicate their choice of stance. If one or both players during a mission have previously played a mission, reroll the mission selection.

Initial pairings will be based on NATO against Warsaw Pact, distance traveled by players, and previous standings on battle rankings. Subsequent parings will be based on wins and losses and relative score of wins and losses. Table assignment will be random and no table can be requested to be played on. The TO will attempt to ensure no player plays on the same table twice. No player will play on the same table consecutively. Players with limited mobility will be accommodated for.

The TO will announce time throughout the tournament. If the round is about to end (30mins or less) both players should be able to get a full turn in before the round ends. In addition missions where objectives don’t go live until the 6th turn should play until those objectives go live, giving the attacker and defender an equal chance of winning. When time is called players need to finish the step they are on.

Any questions should go to Anthony Burger, [email protected]

Any arguments or rule questions should be attempted to be resolved by first checking the rulebook, the players should then refer to the tournament organizer(s) (Anthony Burger).

Players will be scored 3 ways:
Gameplay: Gameplay points will be based on the scoring system from the Team Yankee, Max points 8 unless modified by a forces special rule. Total possible points 24.

Painting/Hobby: This will be according to the looks at aesthetic according to peers and judges. A display board is not required and will not be scored but is useful for carrying models. At the end of the second round, players can leave their armies out to be judged by both official painting judges and peers. Players should also leave a copy of their list out as a reference. Official judging will be done by Anthony Burger and one other person who doesn’t play Team Yankee. You can also omit your army from judging but will not be able to receive a painting award. Max points 7
Painting/Hobby points will be awarded as follows:
100% of army painted and 100% of army based (1 point).
A coherent color and basing scheme is used for the army (exception for support units, aerial units, and units of a different nation) (1 point).
Army is highlighted and shaded (at least 50% of army) (1 point).
Army has decals or other iconography and/or custom basing (at least 50% of army) (1 point)
Army has a name and unit history. Players should have typed document with the name and at least a paragraph about their force. (1 point).
Players pick. Players will write down which army they think looks the best. The army with the most votes will get 2 points. (2 points). In the case of ties, each player(s) gets a point. You cannot vote for your own army.

Sportsmanship: At the end of the tournament each player writes down on a piece of paper their name and their 3 opponents based on how enjoyable the game was. Players can distribute up to 5 points, in increments of 3,2,1. Each opponent must receive 1 point. A point will be added by the tournament organizer for submitting their list early. Max points to give 5, to receive 10.

There will be an award for best general as well as second and third places. Ties for general will be broken first by wins, then game points, then strength of schedule (wins/losses of opponents), then sportsmanship. There will also be separate awards for hobby and sportsmanship. If there is a tie for hobby the player(s) with the most individual player votes will get the prize. For sportsmanship ties will be broken by gameplay as noted above.
Prize support will be based on the number of attendees. No player can receive more than one prize, if a player could receive two prizes they will receive the prize worth the higher monetary value, or the one of their choosing.