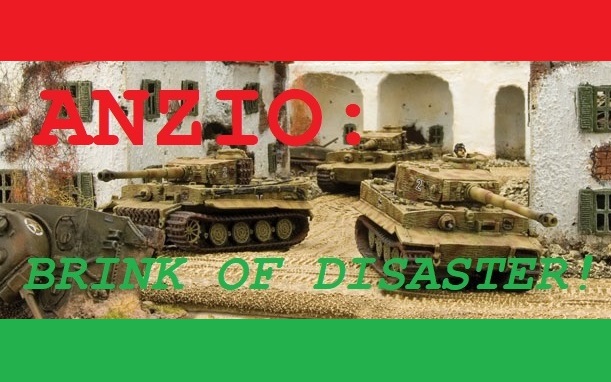 There is room for up to 18 players.

Fair play and good sportsmanship, as always, will be a key focus of this event, as there will potentially be several new players. Veteran players should take it upon themselves to explain what they are doing and why to their inexperienced opponents to reduce confusion, and encourage them to come to future events.

This will be an Axis vs. Allies team event, but with traditional individual pairings and results reported to Battle Rankings. Soviets may play, but may switch from Allies to Axis depending on the player split. Red v. Blue matching will be observed for each match.

The current rulebook (FW009) and most recent Lessons From the Front will be used. The following force books will be permitted:
Fortress Europe
D-Day Americans
D-Day Germans

There will be a heavy narrative element to this event:

February, 1944 – Italy. The Allies are desperate to break the “Gustav Line” at Monte Cassino and take Rome. In January, a small British / American force landed at Anzio in an attempt to turn the Axis flank. While the landings went unopposed, General Lucas delayed the offensive while attempting to consolidate their position. As a result, Field Marshal Kesselring has been able to commit every available division to stopping them.

As the British and American troops begin their respective drives towards Campoleone and Cisterna, our bloody tale begins… General Lucian Truscott believed he was walking into a “deathtrap” – and the Hermann Göring Panzer Division, General Schlemm’s elite 1st Fallschirmjäger, and General Eberhardt von Mackensen’s 14th Army stand ready to prove him right!

After successfully defending Campoleone and Cisterna, General von Mackensen is ordered to launch a counterattack. Intending a methodical advance to “grind away” the Campoleone Salient, the battle quickly devolves into a chaotic unit-on-unit action against the overextended but determined Allies. Despite a brave defense, German forces soon threaten to cut off the salient.

Following the destruction of the Campoleone salient, the new German Offensive,”Operation: Fischfang” was one of the briefest but bloodiest events of the Italy campaign, some say the whole war. On Februray 16, German heavy armored units began breaking through the Allied lines, annihilating entire companies. By February 18th, the Panzer Divisions had reached the Allies’ final line of defense – within sight of the sea. Here the British and American men must make a final, desperate stand…

To register email [email protected] with your name and chosen nationality. Players able & willing to field either Axis or Allies are encouraged to announce this at registration and bring both to help ensure even red vs. blue matching.